Posted on November 7, 2019 by Administrator 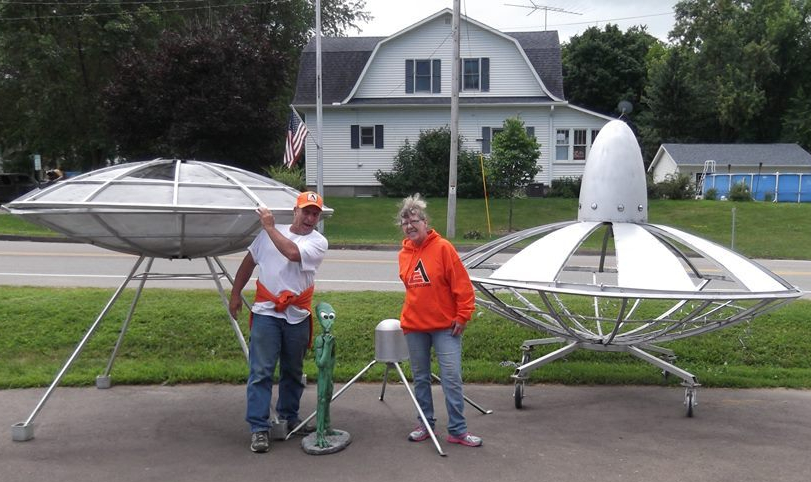 Chester Golat of Ladysmith, WI collects UFO reports. He claims to have collected over 80 of them from reliable witnesses. He says, “It’s not up to me to believe all of them. Just to get the reports. And that’s what I do. I get their story. I have most of them on film or video.” Not every witness Golat interviews is willing to be recorded, but they share their stories without the camera running.

Golat’s UFO experiencers are ordinary people from a vicinity of Wisconsin that, for unknown reasons, happens to be frequented by mysterious unexplained aerial phenomena. The visitations occur all over west central Wisconsin, from the Elmwood Encounters immortalized in the annual UFO Days festival to the unusual phenomena in the area of Eau Claire, Chippewa Falls, Menomonie, Barron, and Ridgeland as documented in a 2004 Fate Magazine article titled “Valley of the UFOs.” In the late 1970s, a local investigator with Dr. Allen Hynek’s Center for UFO Studies documented a flap of sightings with encounters in Baldwin, Dresser, New Richmond, Balsam Lake, and Halfmoon Lake.

It’s not up to me to believe all of them. Just to get the reports.

Golat was inspired to begin collecting UFO reports because he believes that he himself has been a witness. “I have like five or six of my own stories of when I have seen UFOs. Most of the time I have had other people with me.” His first encounter with the seeming extra-terrestrial occurred at the age of 16, in February 1972. On a clear, starlit night, around 8:30 PM, Golat was returning to his home on a snowmobile when he saw a red light shoot up into the night sky.

It shot straight up so fast. I had never seen something like that before.

I was south of my dad’s place where I lived at the time—Golat implement, just south of Conrath, WI, about three miles west of Clarence Fawley’s place. Clarence’s driveway is very long, like a half mile long or more. When I got to the end of the driveway … I went north on Country Trunk I. I could see the whole sky as it was very clear out that night, and I could see all of the stars. Just then I saw a bright red light shoot straight up in the sky, so fast that, if I would have blinked, I would have missed it. It was so bright that it stuck out from all the other stars. The other stars were white and blue, and this was all red. It shot straight up so fast. I had never seen something like that before.

Golat reports several other instances of inexplicable aerial phenomenon that he personally has experienced in the area. On one occasion, while watching TV with his wife Deb, they noted the daylight fade into sudden darkness as a shadow the size of football field passed over their house. Six seconds later, the shadow was gone. Golat says, “I looked out the window; it was sunny out, and no clouds in the sky, and we did not hear a thing. So what was it?” That’s the question everyone would like answered.

Golat’s most recent glimpse of something unusual in the sky took place in August of 2019 when a bright flash of light through the window attracted his attention. Looking out the window north toward Ladysmith, the direction from which he had seen the flash of light, he could see the town water tower and the lights on it and the local pellet factory. “Then I saw a light go from west to east, back and forth, just above the height of the water tower and past the pellet factory. It went back and forth more than eight times, then it was gone. I heard no sound. No sound at all. The lights were blue, white, green, and orange-yellow. I watched it for about 60-80 seconds.”

Collecting local UFO reports doesn’t fill all of Golat’s time. Chester is employed at the Ladysmith Walmart and conducts a few small businesses on the side. He and his wife Deb also organize the Golat Implement Show in Rusk County. Golat served nine years in the Wisconsin Guard, did some farming, and worked with his father at Golat Implement. He’s raced snomobliles, motorcycles, and stock-cars. Despite a busy life, he’s always got time for a UFO story if you’ve got one to tell him. Maybe he’ll share a few of them with us at UFOdays.net.