Posted on December 23, 2019 by Administrator 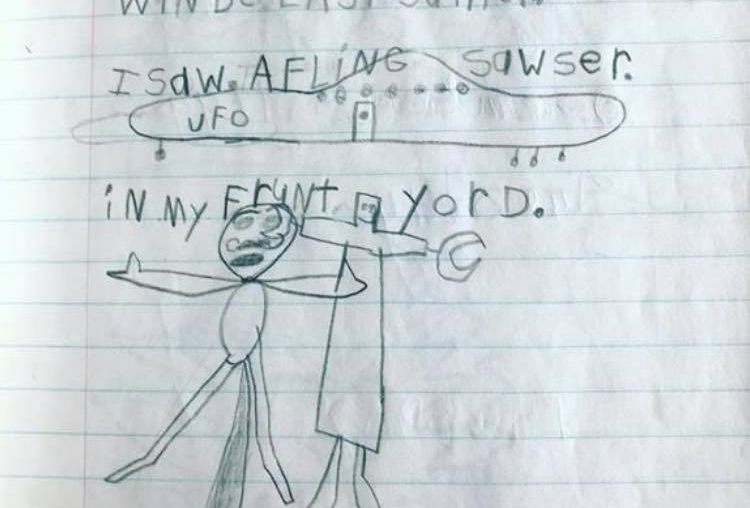 The year 1979 was a big year for UFOs in Minnesota and Western Wisconsin. Several of the stories featured on UFOdays.net focus on the local UFO Flap of 1979. Here’s one from a reliable witness, along with his sketch of the encounter.

Jeremy Liebig (yes, that is his real name, and, no, it does not reduce his credibility) had an eerie encounter with glowing orbs near Minnesota’s North Shore in the early 2000s, but it wasn’t his first UFO encounter. His first sighting on the North Shore occurred when he was just six years old, not long before the Val Johnson story and the ensuing UFO Flap of 1979.

That fall, Jeremy recorded the incident in his elementary school journal.

Here’s Jeremy’s story in his own words as he told it to UFOdays.net, forty years after the encounter:

I believe it was summer of 1979. I was sitting in our living room on the North Shore of Minnesota, which overlooked Lake Superior. I was just laying on the floor drawing in a sketchbook. Our front window facing the lake was multi-paned. Probably 1’x 1’ panes.

As I was drawing, suddenly there was a light coming through the window and the shadow of the panes was visible on the floor where I was drawing. I looked up and outside, and there was a saucer-shaped, brightly illuminated craft maybe 50-100 feet above our house. It had multiple lights that pulsated in colors from yellow to purple to blue.

My dad was sitting with his back to the window reading a newspaper and half watching our crappy black and white television, and at the same time, listening to the radio. I jumped up, told him, almost yelling, “There is a UFO!” I have no idea why I thought so, I just knew.

My dad proceeded to keep his nose in the newspaper, listening to the radio station that came across the lake from Michigan. He basically said “Whatever, funny stuff kid.” He never looked up from his paper.

The object lingered for only about two minutes at most. It illuminated our living room and the sky above. It hovered motionless, and then blasted away far too fast for me to see anything besides a tiny trail like a reverse meteor.

About a half hour later, the Michigan radio station to which my dad was listening began reporting UFO sightings all along the south and north shore of Lake Superior that night. My dad shot up from his chair. He couldn’t believe what he was hearing. He asked me multiple times about what I saw, and he asked for descriptions. He was visibly annoyed with himself for ignoring his six-year-old kid who was trying to tell him there was something in the sky.

We sat out all night with a camera, hoping to catch something. Unfortunately we did not.

← When You See Those Flying Saucers
MN MUFON Featured on TPT →

One Comment on “Flying Saucer on MN North Shore”