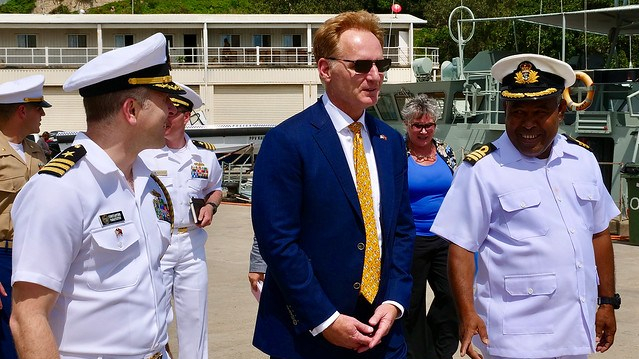 Mark Walker thinks the Navy’s holding out on him. Navy Undersecretary Thomas Modly replied to Rep. Mark Walker’s request for more information about the UFOs the Navy has recently admitted to encountering. Walker, a ranking member of the Intelligence and Counterterrorism Subcommittee, addressed his concerns in a July 16 letter to Navy secretary Richard Spencer. That inquiry asked for for a threat assessment and for further details about the unidentified aerial phenomenon. Walker asked for information about whether or not Navy investigations of the reports are being conducted, and he specifically asked about what foreign powers might possess such advanced technology.

Read the UFOdays story Mark Walker’s original letter to the Navy, download the letter, and watch an interview with Walker here.

POLITICO reports that Walker received what he considers an unsatisfactory reply from the Navy.  Navy Undersecretary Thomas Modly said, “The Department of the Navy takes these reports very seriously and continues to log sightings and fully investigate the accounts.” The reply ignores most of Rep. Walker’s specific questions, and the brevity of the response conveys a tone of “mind your own business.” Rep. Walker, a top Republican on the House Homeland Security Committee, protests that legitimate threats to the United States are his business. Walker told POLITICO, “While I am encouraged the Under Secretary of the Navy confirmed that UAP encounters are fully investigated, there is frustration with the lack of answers to specific questions about the threat that superior aircraft flying in United States airspace may pose.”

All of this will sound  familiar to anyone acquainted with the long, tortured saga of United States Government and armed forces involvement with UFO investigations. Most likely, the Navy has no idea what its pilots have encountered, nor do they have any clue about how to pursue further investigation, but to admit to that will sound like incompetence. On the other hand, if they remain reticent and refuse to directly answer questions, the populace will suspect conspiracy and cover-up. The solution? Debunk the UFOs and claim that they aren’t real—just misidentifications of conventional objects and phenomena. It worked for the Air Force.