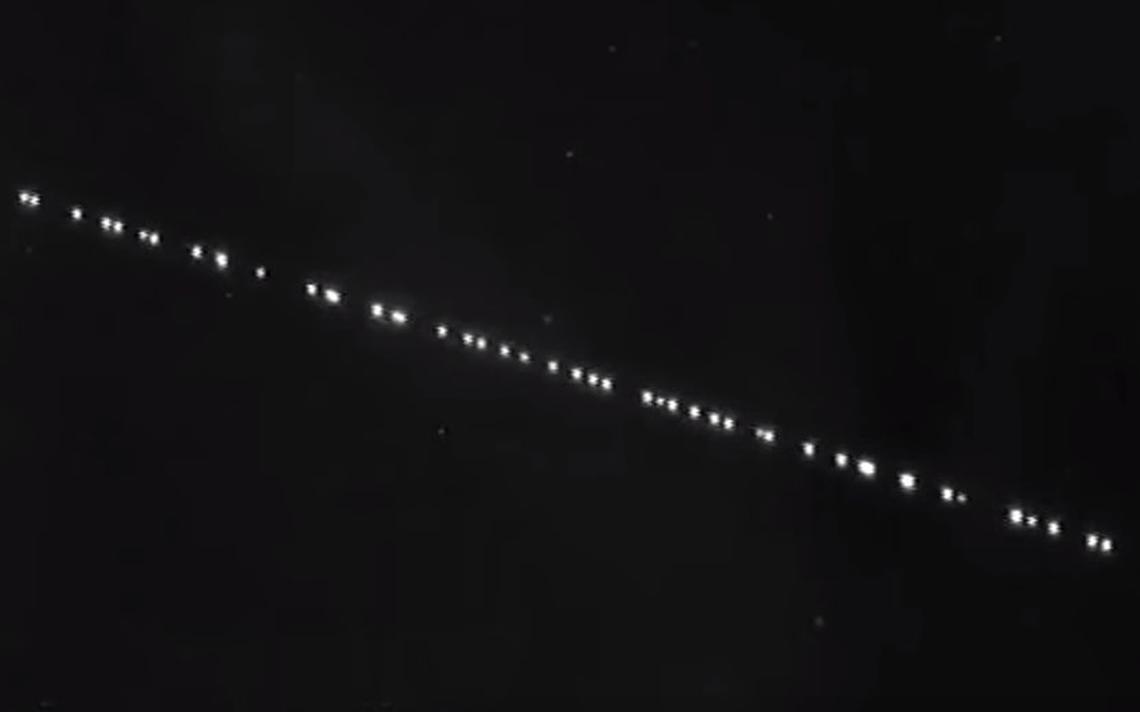 I have never seen a UFO or flying saucer or nocturnal light that I thought might be extra-planetary. Not until May of 2019, at my home on Minnesota’s North Shore of Lake Superior.

It was Memorial Day weekend, and my wife, our son, and our daughter-in-law were out on the deck stargazing. I was inside with the grandson. Suddenly I heard their voices excitedly calling for me to join them.

I hurried out, grandson in hand, and there in the sky I beheld it! Wonder of Wonders! A fleet of unidentified flying objects streaking across the sky in a linear formation. I confidently declared, “It’s either a new technology we have never before seen or something extraterrestrial.”

It felt like a moment from a sci-fi movie, or perhaps from the original Christmas story. Check out the video below to see EXACTLY what we saw pass before our wondering eyes and over our house in the clear sky that night.

That string of UFOs didn’t stay unidentified for long. Thanks to the power of Google Search, we were able to identify the phenomenon within a few minutes. It turned out to be “a new technology we have never before seen.” But until we figured that out, those first few minutes were amazing. For a brief few minutes, I had a sense of wonder of what it might be like for someone who actually has the experience of seeing the inexplicable.

According to the National UFO Reporting Center (NUFROC), 2019 saw a significant rise in the number of UFO reports. An ABC News story on the 2019 increase noted that reports to NUFORC went from 3,395 in 2018 to 5,971 sightings in 2019. (These numbers represents only a sample. Most sightings, of course, are not reported to NUFORC.)

The significant increase in reports doesn’t mean there’s more UFOs flying around out there, it just means there’s more UFO reports. There’s some obvious reasons for that uptick.

The dramatic increase in media attention we saw through the course of 2019 partially accounts for the spike. As people read about the phenomenon in legitimate news sources, they are more likely to watch the skies and more likely to report when they see something unusual. This year, all the major media sources have picked up the story.  The media has learned that UFOs are actually a real phenomenon that our own military cannot identify and our own government can no longer deny. That admission has removed some of the stigmatization and encouraged people who see something unusual in the sky to report it.

Then there was the Storm Area 51 hype, an event inspired by a recent documentary on Bob Lazar’s dubious story. Although the Storm Area 51 event turned out to be a non-event, the increase in media attention must have certainly also garnered an increase in interest in the subject of UFO phenomena and a resulting increase in reports.

And then there’s Elon Musk and his SpaceX Starlink satellites. Those satellite launches, we can say for sure, have been the source of lots of excited reports to NUFORC and all UFO reporting centers. The Starlink (which sound suspiciously like Skynet) satellites are responsible for several waves of reports from excited sky-gazers. According to space.com, they have even caught astronomers off guard.

As mentioned above, some of us here at UFOdays happened to see the first chain of Starlink Satellites last Memorial Day weekend–only a day or so after their initial launch–as they traversed the sky of Northern Minnesota near the shores of Lake Superior. It sure as heck looked like an alien invasion fleet. But before sending the report to NUFORC or MUFON, we did a tiny little bit of due diligence by making a simple Google Search to see if anyone else had seen this strange line of UFOs streaking across the sky. Click here to let me Google that for you.