The Scoop on UFO Crash Retrievals 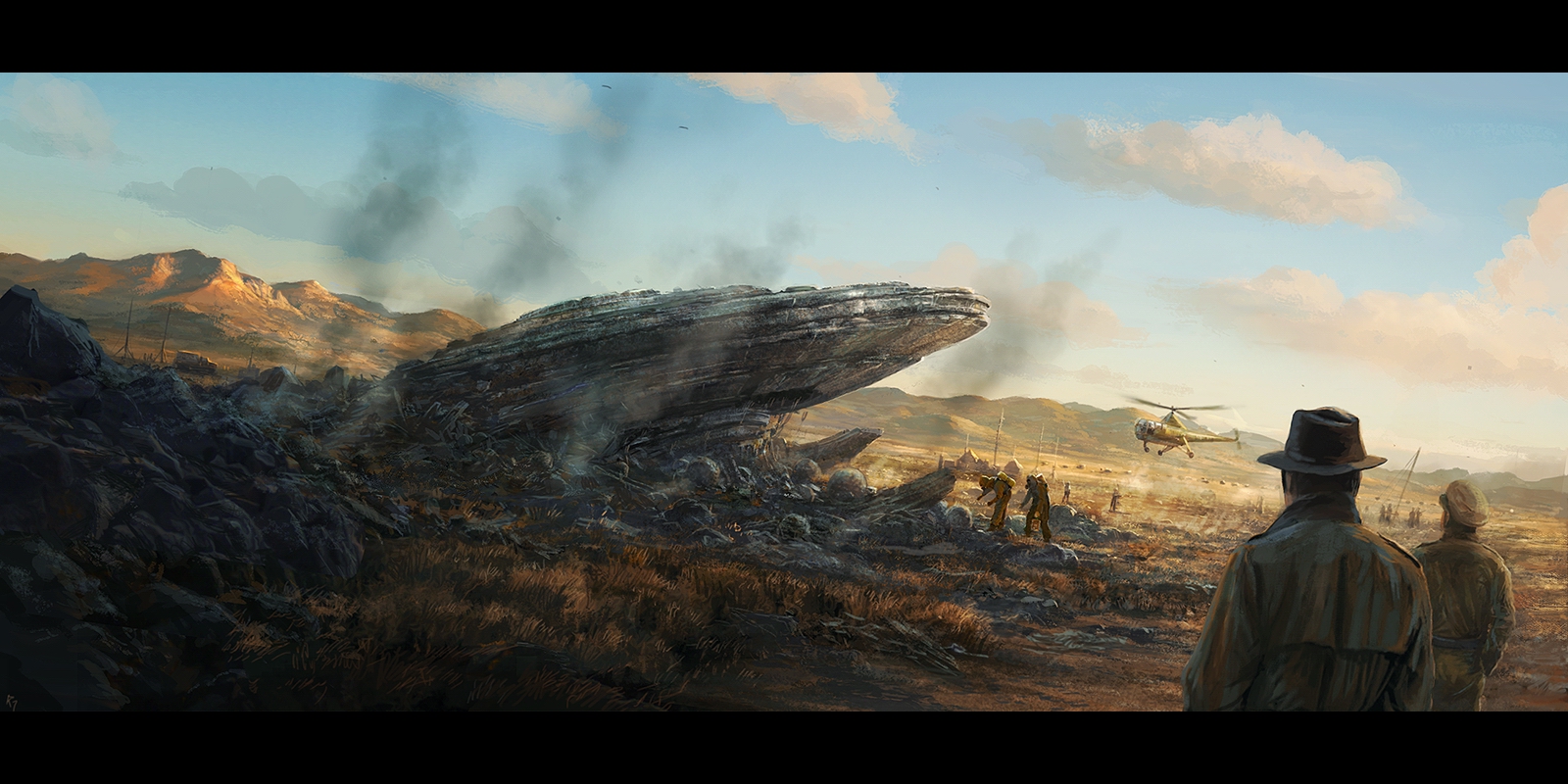 The two journalists who gave us the New York Times story about government UFO programs and UFO crash retrievals have released a follow-up piece in the Times Insider. In the article titled “Do We Believe in U.F.O.s? That’s the Wrong Question,” Leslie Kean and Ralph Blumenthal offer a few clarifications. They disavow any type of faith or conviction that UFOs exist because “their existence, or nonexistence, is not a matter of belief … unidentified means we don’t know what they are.”

No one’s going to argue with that. What we want to know about is the controversial claim they made about our government researching extraterrestrial debris and materials from downed UFOs!

The New York Times piece implied that the government is conducting reverse engineering research on retrievals from UFO crash sites. In the Times Insider, Kean and Blumenthal state, “Our latest article provided a more daunting set of challenges, since we dealt with the possible existence of retrieved materials from U.F.O.s.” From where does that secret information come? Kean and Blumenthal attribute the tip to “numerous associates of the Pentagon program … convinced such crashes have occurred, based on their access to classified information.” This refers to Luis Elizondo and his crew of government spooks and UFO researchers (AATIP, TTSA), but relying on the “convictions” of “numerous” UFOlogists does not sound very convincing, even if they have security clearances. The article falls short of saying that those researchers ever obtained solid evidence of purported crashes or retrievals. Instead, the article says, “The retrieved materials themselves, and any data about them, are completely off-limits to anyone without clearances and a need to know.”

Core Secrets and a Need to Know

That last sentence about “a need to know” alludes directly to the Wilson-Davis document, a mysterious set of notes attributed to government-contract UFO researcher and astrophysicist Eric Davis.

Eric Davis is the scientist cited in the July 23 Times article. The article says Davis gave classified briefings to the Senate Armed Services Committee last October and to a Defense Department agency last March “about retrievals from ‘off-world vehicles not made on this earth.’” Davis also stated that examination of the materials, in some cases, had so far failed to determine their source and led him to conclude, “We couldn’t make it ourselves.” But the real smoke from the smoking gun comes not from the recent briefings but from a recently leaked file of of notes composed by Davis in 2002.

The controversial fifteen-page document seemed to appear out of thin air last year when discovered just sitting there for public download on Imgur. The document, which UFOlogist Richard Dolan describes as the UFO Leak of the Century, relates the essential details of a purported October 16, 2002 conversation between Dr. Eric Davis and former Defense Intelligence Agency Director, Admiral Thomas Wilson.

It was ostensibly a private company under a government contract to study crashed UFOs.

The fifteen pages of typed notes, sometimes referred to as the Core Secrets document, read as a synopsis of the conversation. The cryptic notes seem to be transcribed from a voice recorder and prepared for presentation in a briefing–most probably a briefing intended for Eric Davis’ UFO research chums.

The document starts off setting the stage by describing the scene of the meeting with some cloak-and-dagger drama. Eric Davis is told to meet the admiral at a special projects building in Las Vegas. “Meet at 10 A.M. Don’t be late!” Davis arrives at the rendezvous point promptly at 10. The admiral arrives ten minutes late. He’s in a vehicle with two uniformed Navy officers. A petty officer is driving. The admiral himself, now a civilian, is in a business suit. After the Navy men leave to attend a meeting inside the building, Davis gets in the car with Wilson. The two men privately discuss what they know about UFOs. You can read the document itself where it first appeared on Imgur. 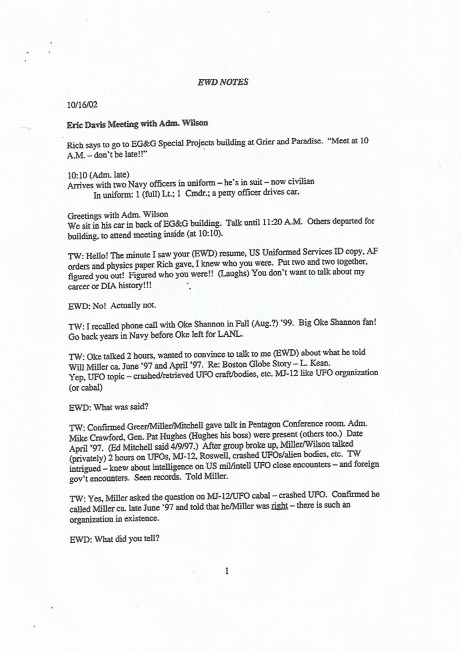 Wilson tells Davis that, back in 1997, when he was still an office under the Clinton administration, he tried digging up government intelligence on UFOs. In the process, he stumbled upon budgeting for a covert special access project (SAP) conducted by a major US defense contractor. It was ostensibly a private company under a government contract to study crashed UFOs.

Wilson flew out to meet with the heads of the program. “They were a reverse engineering program—Something recovered years ago in the past—technological hardware was recovered … So I thought they meant recovered Soviet/Chinese, etc. hardware and reverse engineer it – like a missile or intel platform or aircraft – actually came to meeting expecting to find a sensitive foreign collection and reverse engineering operation – thought ‘UFOs’ used as a cover for that … They had a craft—an intact craft they believed could fly … it was technology that was not of this earth—not made by man—not by human hands.”

Wilson describes the defense contractor’s frustration over the slow progress on the research, “[They] were trying to understand and exploit technology; their program was going on for years and years with very slow progress, agonizingly slow with little or no success.”

They had a craft—an intact craft they believed could fly … it was technology that was not of this earth—not made by man—not by human hands.

When Wilson demanded access to the program, however, the project managers denied him, saying, that, even as Deputy Director of the Defense Intelligence Agency (DIA), he did not have clearance to the program because he did not have “need to know” status. The program was off-limits to US government personal except for a short list of names. Even the president of the United States did not have access.

Wilson was furious. He turned to oversight committees at the Pentagon to demand access, but they stood by the decision of the defense contractor and told him to drop the entire matter or suffer consequences: “If I didn’t follow their suggestion … I would not see Director DIA promotion, get early retirement, lose 1 or 2 stars along the way.” So he dropped the matter.

That’s the gist of the story as Wilson told it to Davis. Read the entire document for yourself.

Source of the Document

When these mysterious papers appeared on the internet a year ago, now-retired Admiral Wilson denied any knowledge about the subject. He denied that the conversation ever took place. He even denied knowing who Eric Davis was.

Here at UFOdays.net, we saw the document hit the internet over a year ago, but we didn’t cover the story at that time because of the unknown provenance of the documents. That they seemed to just appear out of nowhere on Imgur made their reliability more than a little suspect. There have been plenty of frauds, fakes, and forgeries circulated in the UFO community before.

The document was found in the personal papers of NASA astronaut Edgar Mitchell, the sixth man to walk on the moon.

In recent weeks, however, the chain of transmission has become clear and the whole story has come out. The document was originally discovered in the personal papers of NASA astronaut Edgar Mitchell, the sixth man to walk on the moon. It’s well known that Mitchell was an avid UFOlogist who had contact with Admiral Wilson and pressed him to investigate government UFO secrets. Wilson even specifically mentions Mitchell’s name in the papers, and Mitchell ran in the same circles as Davis too. After Mitchell’s death in February of 2016, the Wilson-Davis papers were found among his personal possessions.

Watch this highly entertaining (and very long) video in which several leading UFOlogists discuss the origin of the documents, the train of transmission that led us to where we are at today, and the significance of the leak:

After the recent revelations about the source of the document, there is no longer any reason to doubt its authenticity. Whether or not the document accurately conveys Wilson’s words is still up for debate. Could it contain embellishments and exaggerations? We don’t know. But if the document is accurate, well … dang! Just like in the movies!

Wilson-Davis and the Times Article

What does all of this have to do with last week’s bombshell New York Times story?

While researching for the recent New York Times story, Kean and Blumenthal were pursuing information about the Wilson-Davis documents. They interviewed UFOlogy researchers about the subject, and one researcher has even removed his discussion about the document from the internet in order to protect Kean and Blumenthal’s efforts and to preserve their sources for future articles. In the final edit, for whatever reason, the New York Times omitted mentioning the Wilson-Davis document, but they retained the implications raised by the document: namely that government defense contractors are in possession of UFO crash retrievals and have been for a long time.

Now we know why Kean and Blumenthal doubled down and took the risky gamble of making such sensationalist-sounding claims. They knew that the origin of the Wilson-Davis document had been authenticated, and they realized that if they didn’t say something about crash retrievals and government study of materials “not of this earth,” someone else would pick up the story from that document and scoop both them and the Times. It’s a journalist’s worst fear—while being careful and responsible and double-checking sources and facts, someone else comes along and publishes the big story before you.

← UFO Crash Retrievals too Good to be True?
SCIENTISTS CALL FOR UFO STUDIES →