Are UFOs actually super-secret Chinese aircraft? Now that the Navy is admitting that our pilots and radar operators are routinely encountering UFOs intruding over American airspace, many are wondering if the mysterious craft might actually belong to a foreign power like China. Turns out that China would like us to think so. The State tabloid the Global Times released photos and write-up about an experimental craft that looks like a UFO.

Beijing’s latest toy is a Flying Saucer knock-off, actually a helicopter with the rotor encased within a flying wing design, making the entire aircraft into  a wide sphere with a central cockpit that seats two pilots. Turbo jet engines provide thrust. The craft is called the “Super Great White Shark,” and it’s supposed to function as a stealth craft capable of reaching a top speed of 650 kilometers per hour, a ceiling of 6,000 meters and a climb rate of 16.5 meters per second. Sounds like a good attempt to make a flying saucer. 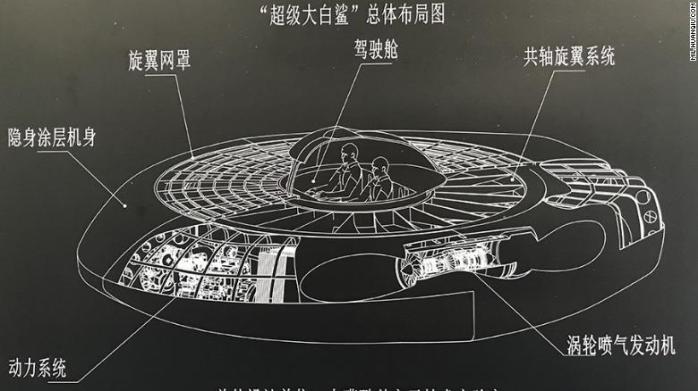 Is it possible that US military encounters with UFOs have actually been simply encounters with secret prototypes like this from China? No. According to the article, the Super Great White Shark has not yet been air tested, and even if it had been secretly tested and under development, the description of its capabilities falls far short of the type of maneuverability, accelerations, and speed described in UFO encounters that date all the way back to 1947. Besides, if the new Chinese craft really is a secret “armed helicopter” created for the “future digital information battlefield,” why did China make it public along with some basic design schematics?

Here’s the game. United States government officials and media sources have publicly speculated on the possibility that UFO incursions might be advanced Chinese craft. Some developers within the Navy have even submitted patents to counter the possibility of Chinese alien tech. It’s in China’s best interest that we believe that the People’s Republic already possess such advanced technology … possibly even alien technology. It’s the old disinformation game.

Ironically, the same type of speculation has been going on since the Foo Fighters of WWII and the Flying Saucers wave of 1947. Allied forces suspected the mysterious Foo Fighters that paced American bombers of being secret Nazi technology, and the US Air Force initially assumed that the flying saucers that made their dramatic debut over American airspace seventy-two years ago were secret Soviet aircraft inspecting our military bases and nuclear program.

Is it possible that China has cracked UFO alien tech to create super advanced aircraft? UFO Conspiracy Theorists take it as a matter of fact that secret government programs have replicated alien technology recovered from UFO crash sites like Roswell to create our own secret UFO fleet. That’s what was going on at Area 51, right? The reality is that even our most advanced flight technology comes no place close to the dynamics and characteristics which UFO phenomenon consistently displays. The entire idea of a secret program in possession of alien technology and creating military applications is based on layer upon layer of conspiracy theory mythology.

It is true that military contractors have tried to emulate UFO technology and create our own versions of flying saucers, but these attempts have never met with success. CNN points out that the US was trying to make it’s own Flying Saucers as far back as the 1950s. The craft have never proven viable. Chances are that the Great White Shark won’t survive flight testing. From China’s perspective, that’s not the important thing. The important thing is that the world thinks China has the edge on the US and that flying saucers might actually be Chinese stealth craft. Espionage, propaganda, and disinformation all come into play. It’s a world of wheels within wheels.